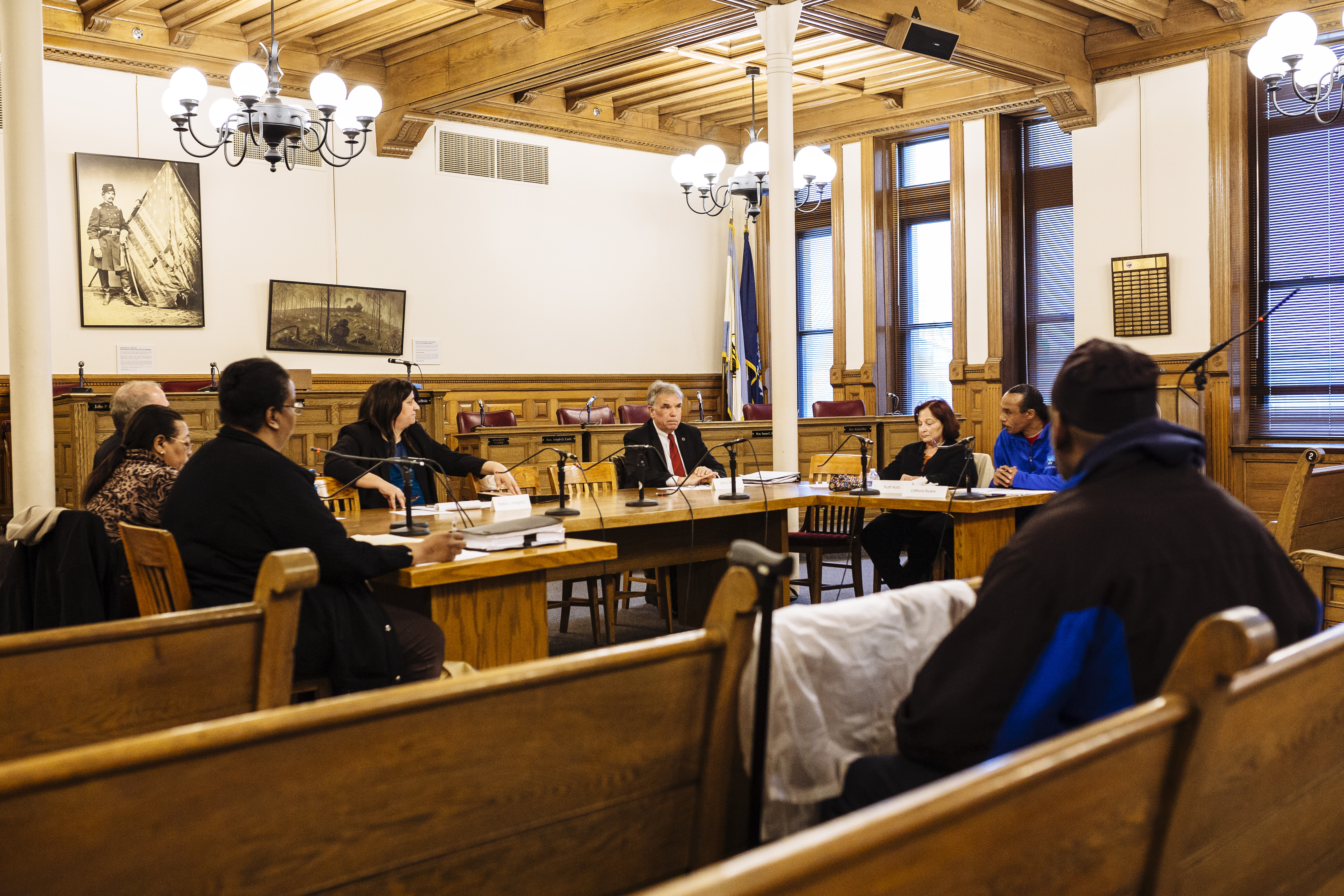 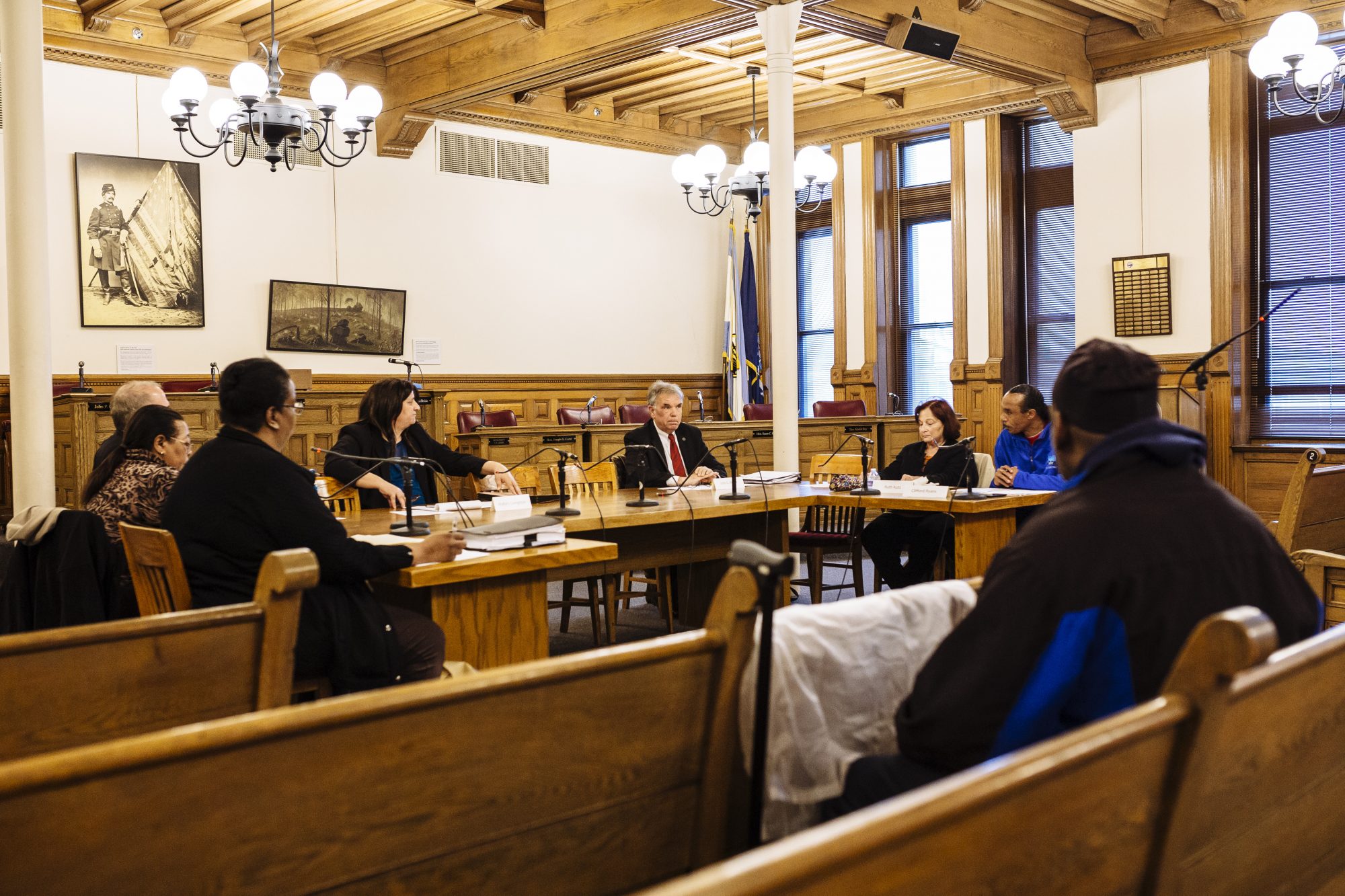 The Citizen Review Board in Syracuse was established in 1993 and revamped in 2011. The board, which is structured to consist of 11 people and meet monthly, has subpoena power to call witnesses, a point of contention in civilian oversight nationwide.

Disagreements, vacancies leave
Citizen Review Board in some disarray

The CRB was revamped in 2011, but six years later the independent watchdog struggles to function effectively, despite some successes

Most of the Syracuse Citizen Review Board’s April meeting was mundane, with normal discussion about several board vacancies and the unfilled top job of administrator. But about 35 minutes into the gathering, board members became animated discussing their relationship with Syracuse police.

“How is it that we’re going to change relationships between the police department and the community if we don’t pursue avenues where we can meet each other halfway?” asked board member Clifford Ryans, a community organizer who joined the CRB in December.

The Syracuse CRB’s relationship with the police department remains rocky today, despite a 2011 overhaul of the body. Board members are frustrated with what they deem a lack of respect from SPD. Syracuse Police Chief Frank Fowler calls the CRB “broken.”

Six years after the revamp, the board is still facing problems, including consistent battles with SPD over the board’s role of oversight, and the lack of an administrator since late 2016. Yet two court decisions in favor of the CRB have set precedent for civilian oversight across the U.S.

The Citizen Review Board polices the police, investigating civilian complaints over treatment by the police department. The 11-person board has subpoena power to call witnesses, a point of contention in civilian oversight nationwide, and meets monthly to review cases. Not every civilian oversight board across the U.S. has subpoena power, which was given to the Syracuse CRB in its 2011 overhaul led by then-Common Councilor Pamela Hunter. The board has issued subpoenas, most recently in 2015, according to the board’s third-quarter report from that year.

After the CRB reviews a complaint, the board makes a recommendation for action to Fowler, who can follow it or ignore it. In October 2015, Fowler stopped responding to the board in writing over whether he imposed discipline on officers in those cases that took the CRB longer than 60 days to review, even though he had done so for several years.

Fowler’s answers are kept private by police and the CRB. He responds by letter to cases, giving an explanation and outcome.

Syracuse created its CRB in 1993. Civilian oversight has a 40-year history, led by a National Association for Civilian Oversight of Law Enforcement.

There were just more than 100 oversight agencies in the U.S. in 2001. Fifteen years later, that number had grown to more than 144, according to a 2016 NACOLE report. Driving that has been incidents that have tested communities’ relationships with police, said Liana Perez, the organization’s director of operations.

“Oversight helps (police) bridge the gap with the community, especially when there’s a major incident,” Perez said. “The role of the oversight should always be representing the balance — you’re not pro-community or pro-police, it’s whatever the facts of each individual case support.”

“Oversight helps (police) bridge the gap with the community, especially when there’s a major incident,” Perez said. “The role of the oversight should always be representing the balance — you’re not pro-community or pro-police, it’s whatever the facts of each individual case support.”

Civilian oversight is in the best interest of police as well as the community, said Mallory Livingston, a local lawyer who serves as the chair of the Syracuse board. She added that the vast majority of complaints are related to a handful of officers.

In its 2015 annual report, the most recent report filed by the CRB, the board outlined 43 cases of excessive force and 11 police officers with two or more allegations of it sustained by the CRB in independent hearings. Syracuse police declined to respond publicly to the report when it came out. > VIEW THE 2015 ANNUAL REPORT

“If there was a way to get officers off the street who shouldn’t be on the street, but not put an end to their careers, then it would be easier to find some cooperation on their side,” Livingston said.

The two sides engaged in a legal battle over a detail in the local ordinance that gives the CRB power, arising from the 60-day dispute. A state supreme court judge ruled in July 2016 that Fowler must inform the CRB about the action he takes regarding officers accused by the board of misconduct, even in those cases that take longer than 60 days to investigate and complete. The city ordinance said the chief was exempt in those instances, a loophole given that about 25 percent of the board’s reviews take longer than 60 days.

The decision was appealed and the state appellate court ruled in favor of the CRB in March, setting landmark precedent for civilian oversight across the country.

There was discussion last year among Common Council members to revoke the CRB’s right to sue. The resolution, introduced by Councilor Steve Thompson, was ultimately withdrawn. Thompson, a former SPD chief, acts as a liaison, both between council and the CRB and the council and SPD.

“(The CRB) gives people an outlet that they might not have otherwise. It gives those that feel they’ve been mistreated by police an outlet,” Thompson said in a March interview. “For the city, it’s a beneficial thing for its citizens.”

Disagreements between law enforcement and civilian oversight is common, according to a 2001 U.S. Department of Justice report on citizen review of police. The main concerns of police, according to the report, are that citizens shouldn’t interfere in police work and that they don’t understand it, and that the process is unfair.

The U.S. justice department has launched investigations into police departments across the country in recent years and has mandated oversight in communities including Ferguson, Missouri, Baltimore and Cleveland. Since taking over as U.S. attorney general in February, though, Jeff Sessions has put those into question, ordering his department to review the several dozen such agreements made under former President Barack Obama.

A citizen lack of understanding is of particular concern for Syracuse police. No members of the CRB have law enforcement experience. Fowler said some board members have the wrong mentality — trying to find police wrongdoing rather than the complete truth.

“I see the point of it. As a chief of police, I don’t have an issue with it. I see where they’re coming from,” said Fowler, who was part of the 2011 revamp. “People just want to see checks and balances. They’re entitled to that.”

The board used to have a law enforcement presence. Dave Barrette, a former deputy police chief, stepped down in December soon after David Chaplin II, the board’s administrator, resigned after just seven months.

Disagreements on the board’s direction and leadership styles led to Chaplin’s, Barrette’s and Peter Christiana’s resignation in December, Chaplin said in a phone conversation in mid-May. He declined to go into further detail.

The CRB is still searching for a new administrator, a $60,000-per-year position, as well as four more members.

Chaplin, a former city attorney, was helping the relationship between the CRB and the police department before he resigned, Livingston said at the time.

"I think he was doing a very good job in helping to build a better relationship, a better understanding between the CRB and the police department," Livingston told The Post-Standard. "...On those issues, he did a great job."

The board’s most effective work has come with a stable administrator, challenging the police department on cases and policy.

Without an administrator, the board’s work is more difficult and time-consuming. Board members serve voluntarily and part-time, and the board has failed to produce a 2016 annual report. The search continues for an administrator, which would improve the public legitimacy of the board.

In the meantime, the work falls on the seven current board members, who are stretched thin in their ability to deliver reviews and reports.

“No not-for-profit would just not do any work because they didn’t have an executive director. The responsibility falls to the board members, especially with all of the work that went into reconstituting the board and the legislation,” Hunter said. “There’s extra effort that needs to be put into it to make sure it doesn’t falter.”

What is the CRB?
The Citizen Review Board is an 11-person group of private citizens who act as an independent review of Syracuse police. Board members are appointed by the mayor and Common Council members, and serve alongside an administrator who is paid $60,000 per year by the city. The board meets the first Thursday of every month at 5:30 p.m. in City Hall. 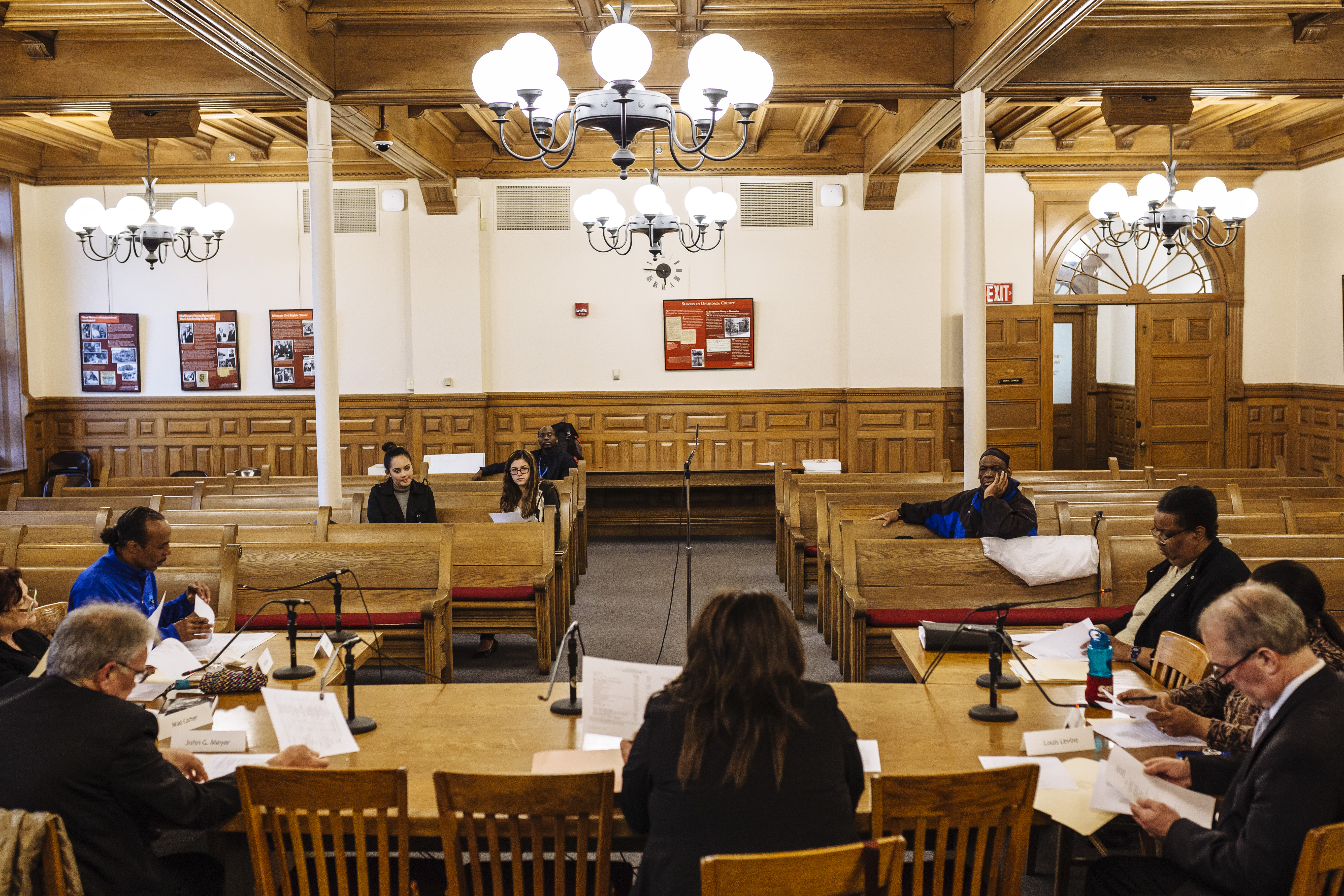 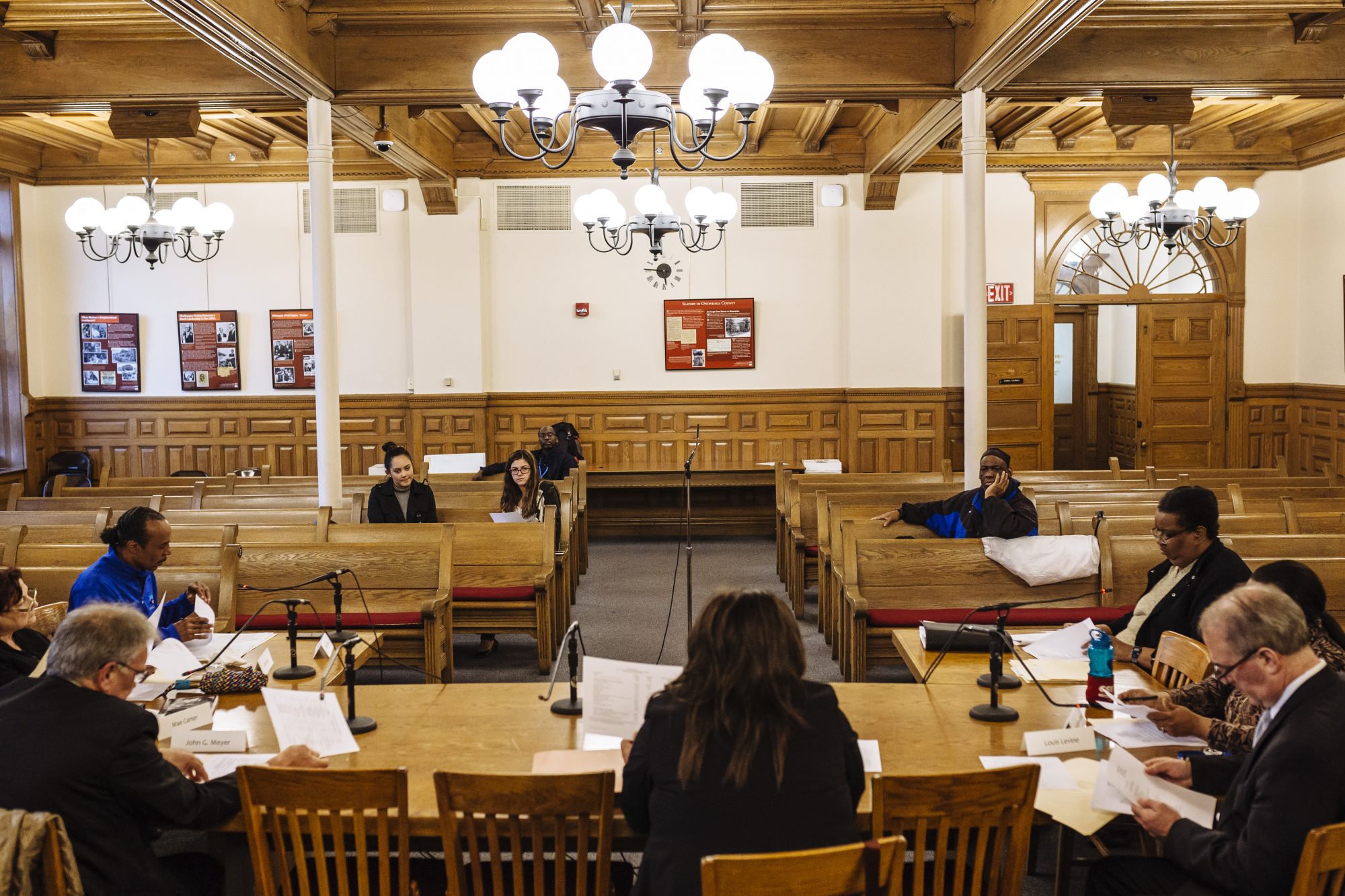 The board meets once a month and has seen a decrease in community attendance. Board members are currently trying to find ways to bring community members to their meetings to speak on experiences with Syracuse police.

The Citizen Review Board through the years

Much has happened in the past year for the Citizen Review Board. Here’s a timeline of the CRB through the years and major points in its history.

1993: The Syracuse Citizen Review Board is established.

May 2012: Joseph Lipari takes over as the CRB administrator.

February 2016: The Syracuse Common Council considers — but eventually rules out — an amendment that would restrict the CRB from filing lawsuits.

April 2016: Joseph Lipari steps down as the CRB administrator to take a job in New York City.

May 5, 2016: The CRB votes to make David Chaplin II, a city attorney, its next administrator.

July 28, 2016: A State Supreme Court judge rules that Syracuse Police Chief Frank Fowler must inform the CRB of all actions he takes on all officers accused by the Board of misconduct, even in cases that take longer than 60 days to complete. The ruling is appealed, and the court favors the CRB, setting landmark precedent for civilian oversight across the U.S.

Dec. 21, 2016: David Chaplin II resigns as the CRB administrator after a seven-month tenure, saying he wants to pursue other opportunities and leaving the board without a leader. 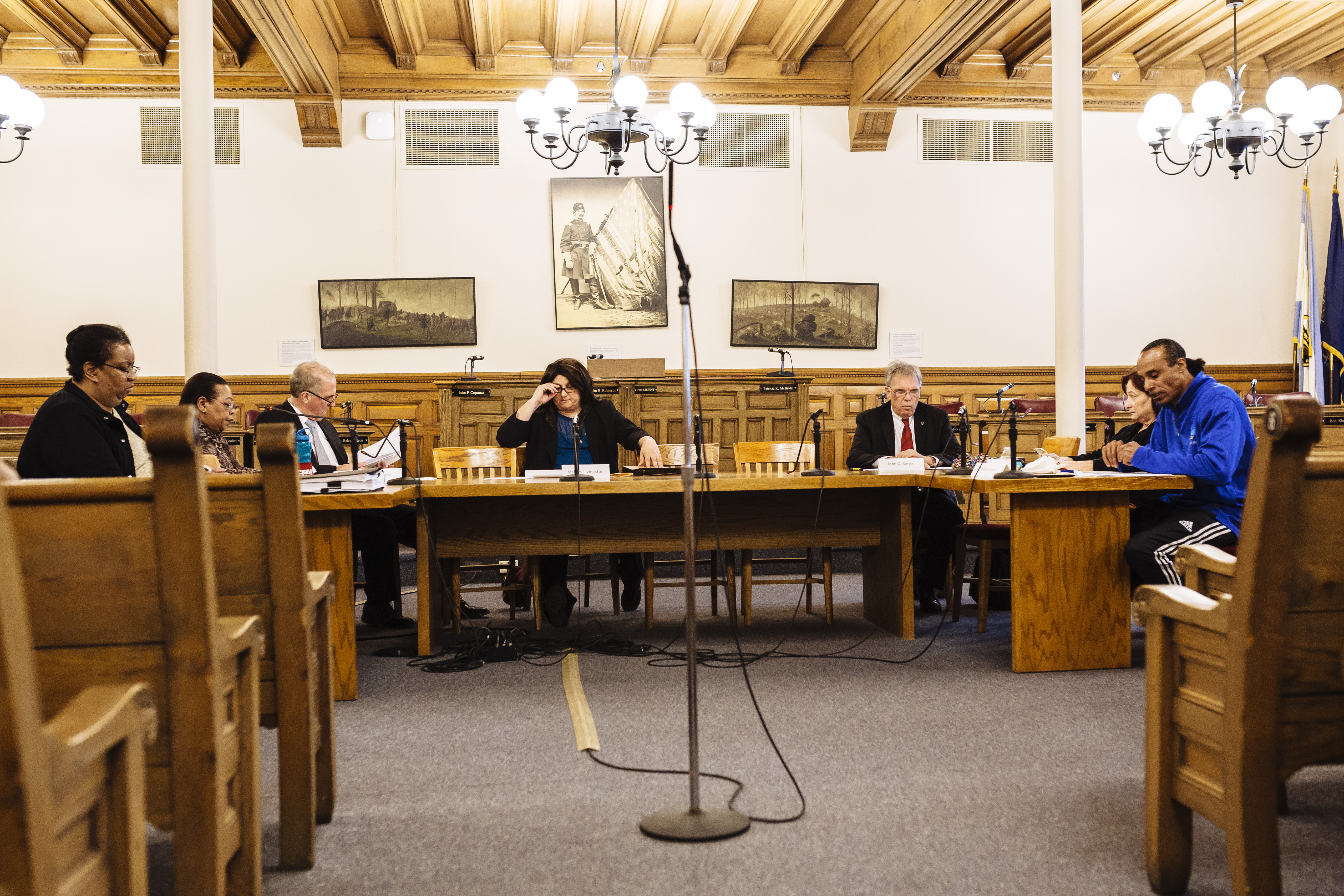 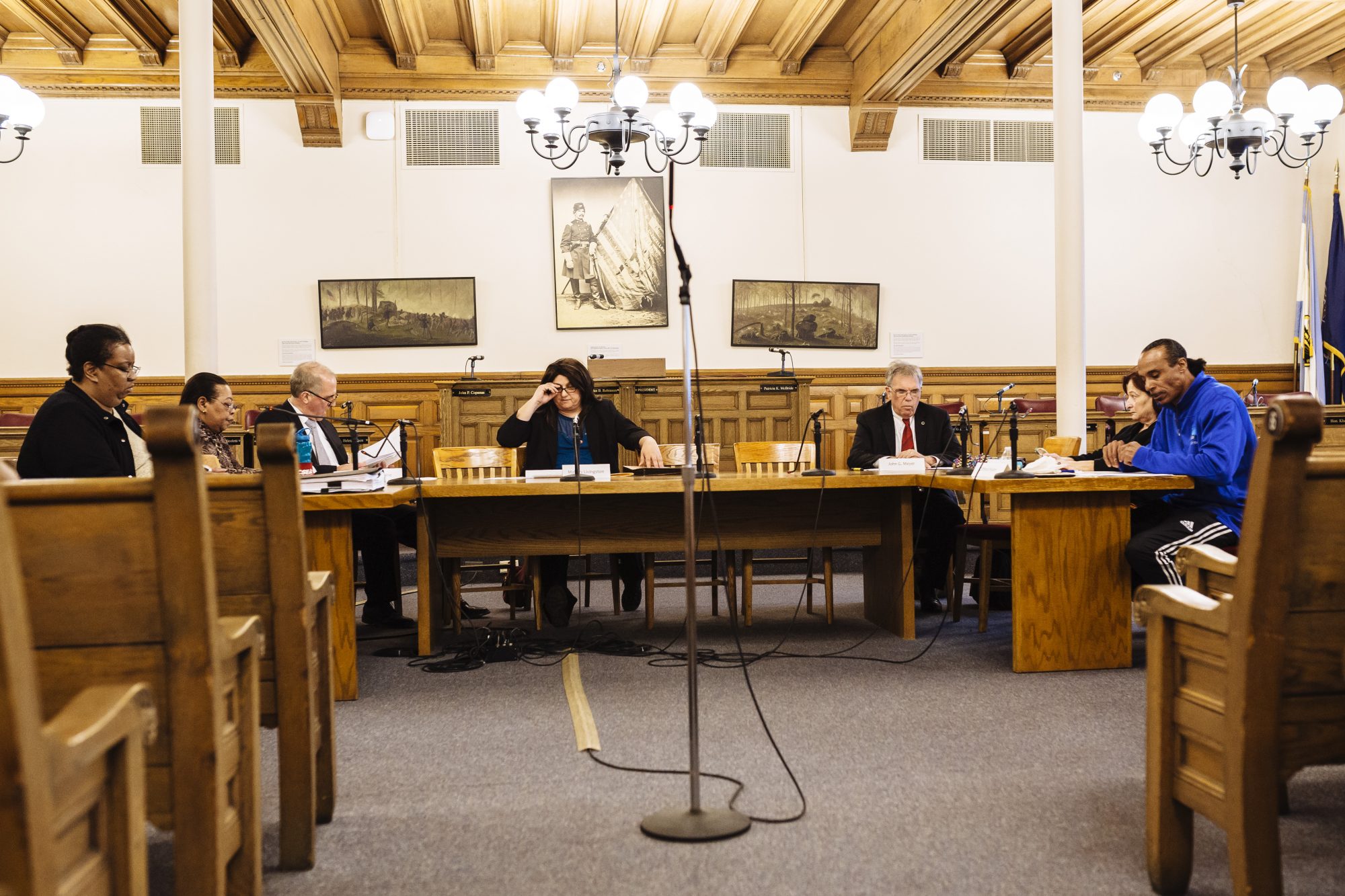 Currently no members of the CRB have law enforcement experience. Chief Frank Fowler believes some board members have the wrong mentality of trying to find police wrongdoing rather than the complete truth. “I see the point of it. As a chief of police, I don't have an issue with it. I see where they’re coming from,” said Fowler, who was part of the 2011 revamp. “People just want to see checks and balances. They’re entitled to that.”

How the Syracuse police oversight board compares to similar ones

The makeup of the Syracuse Citizen Review Board differs from peer cities. Here’s how they compare.

The Syracuse Citizen Review Board was established in 1993 and revamped in 2011. The revamp was part of a nationwide in increasing civilian oversight of police. With a population of close to 145,000 people, Syracuse categorizes as a midsize city.

Here’s a look at five other midsize cities’ oversight boards with Syracuse as a reference.

Syracuse, New York
Population: 144,669
Founded: 1993
Number of members: 11
Term length: Three years
Subpoena power?: Yes
Notes: The CRB has been operating without an administrator since December. There are also only seven members on the Board, with four vacancies.

Dayton, Ohio
Population: 143,355
Founded: 2014
Number of members: Five
Term length: Two years
Subpoena power?: Yes
Notes: The Dayton CRB requires one member be from the legal community and another be from law enforcement. Dayton also has a Community Police Council.

Berkeley, California
Population: 116,768
Founded: 1973
Number of members: Nine
Term length: Two years
Subpoena power?: Yes
Notes: The Berkeley Police Review Commission is one of the oldest in the U.S. and was established directly by voters rather than through city council or mayoral executive order.

Three police shootings, as reported on syracuse.com, ended in fatalities in 2016

National resources and reports on police/community shootings and outcomes

From the L.A. Times: Deaths of black men and women at the hands of police

From the Washington Post: Database of shootings, by year

From NPR: What happened to the officers?

From Huffington Post: More than 250 black people were killed by police in 2016